The History of Hybrid Cars 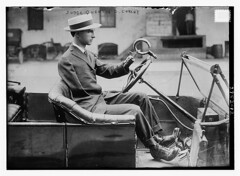 Ever curious how exactly hybrid cars became the economic revelation they are today? Well, it definitely didn’t start in the 1990s, that’s for sure. In fact, alternative-fuel vehicles and transportation were being developed as far back as 1665, which Flemish inventors used to experiment with steam-power in order to power unmanned cars, and, moving forward to the 1700s, steam-powered carriages.

For the most part, though, these were small developments, and it wasn’t until nearly 1900, in 1898, that the first real hybrid car made its grand debut. Although there are conflicting views as to which hybrid came first, the actual hybrid car developed by Porsche utilized a similar engine as in conventional vehicles today to rotate a generator that would power electric motors, located in the actual car wheel’s hubs. This particular Porsche was able to travel to nearly 40 miles simply utilizing the power in the battery pack before it had to quit, and by 1899, two more hybrids had appeared in Paris, at the city’s Salon.

In the earlier years of the twentieth century, there were thousands of hybrid and electric cars being produced and showcased. It seemed that electric and hybrid cars would be the way to travel, and in 1900, the “voiturette,” the first of these hybrids, was made by Pieper and was very similar to the hybrids we already know. The only difference was most likely in the exterior. After all, the French didn’t necessarily have flames painted along the car and spinners on the rims. For this particular hybrid, the purpose of the battery was to help the car in making its way up hills, and while the car was cruising, the battery would recharge itself. There was even a reliability test in 1902 to see which would fare better, a hybrid, or steam-powered or gas-powered vehicles.

But, then, at some point around the 1920s, hybrids suddenly vanished from the public eye, as if they had never existed. Why and how did that happen?

The answer to that is two words: Henry Ford. Ford’s Model T was not only gas-powered, but his production utilized the assembly line, which made these cars much faster to produce, and easier to do so. Regardless of Ford’s later influence, though, in 1905, H. Piper, an engineer, was hoping to patent his own hybrid vehicle that would use an electric motor along with a gas-powered engine. Even in 1905, someone had thought of the hybrids we would use today. The problem was finding the support needed.

There were also hybrid trucks that were used from 1910 to 1918, and still, hybrid cars offered in 1916 could still reach 48 miles to the gallon, although speeds were much lower. Still, efficiency-wise, the hybrid from 1916 was better than the vast majority of conventional and hybrid cars on the market.

Unfortunately, any plans for hybrids were dropped in the 1920s when Ford’s Model T flooded the automobile market. From 1920 to 1965, there was simply no chance for hybrids to develop. Then, in 1969, GM began to experiment with hybrid cars again, and the next thirty years would be filled with tireless efforts of scientists, inventors, and engineers to help create a fast, eco-friendly hybrid.

Finally, in 1997, manufacturers Toyota and Audi premiered their hybrid cars to mixed reactions. The vehicles were hardly flawless, so it took some time to before hybrids were picked back up by manufacturers and kinks were worked out.

But, the most interesting fact about all of this is that considering the history of hybrids, these cars were originally the vehicle of choice for most engineers. So, how could things have been different if hybrids had remained in the spotlight and not blotted out by Henry Ford?

The History of Hybrid Cars Part Shop Page
From Amazon
This entry was posted in Wheels and tagged cars, History, Hybrid. Bookmark the permalink.