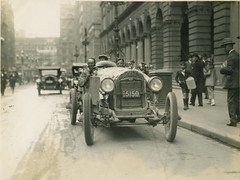 Atoms are the building blocks of the world. Any substance that is made up of only one kind of atom is called an element. Atoms of different elements can connect up with each other. This process is called a chemical reaction. The burning of fuel in an automobile engine is a chemical reaction. We normally refer to this chemical reaction as combustion. Automobile fuels are made up mostly of two elements hydrogen and carbon. These are therefore called hydrocarbons. During complete combustion in the engine, these two elements unite with a third element, the gas oxygen. Each oxygen atom connects up with two hydrogen atoms to form water. Each carbon atom connects up with two oxygen atoms to produce the gas carbon dioxide.

During combustion of gasoline in the engine, the burning gases get very hot. Their temperatures may go as high as 3319OC. This high temperature produces the pressure that makes the engine run and produce power.

With ideal, or perfect, combustion, all of the hydrogen and all of the carbon in the gasoline would combine with oxygen to form harmless water and carbon dioxide. However in the engine we do not get ideal combustion. Instead some of the gasoline does not burn. Also some only partly burns producing carbon monoxide. The unburned gasoline and partly burned gasoline cause pollution of the air as they exit through the tail pipe with the exhaust gases. This is the reason that cars are equipped with anti pollution devices called emission controls. These devices reduce the amount of pollutants coming from the engine.

The concepts involved are expansion of solids with heat. Any solid like the metal in an engine piston, expands and gets larger as its temperature increases. However the piston must be free to move up and down in the cylinder, even if it gets very hot. The piston is designed so that it does not expand too much. If it did it would stick in the cylinder and the engine would be damaged.

Fluids also expand with heat. The rules are pressure increases with increasing temperature. The rule works the other way too. The second rule is temperature increases with increasing pressure. Both rules are at work in the engine cylinders. First a mixture of air and gasoline vapor is taken into the cylinder. Then the piston moves up to compress this mixture. Compressing the mixture – increasing the pressure on the mixture – makes it hot. Next, the compressed mixture is ignited, or set on fire. It burns producing a very high temperature. The high temperature causes high pressure. The high pressure pushes the piston down. This motion is carried to the car wheels so that they turn and the car moves.

In this way scientific and engineering principles help us understand how engines work.

Car Engines Part Shop Page
From Amazon
This entry was posted in Wheels and tagged Engines. Bookmark the permalink.