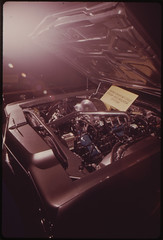 Ethanol cars work in a way very similar to normal gasoline cars, and are a great viable alternative fuel option because of current high gas prices. The only real difference is that ethanol car engines are able to utilize the biofuel ethanol instead of oil based gasoline.

Ethanol fuel itself is extracted from plants such as corn or sugarcane, and refined into an alcohol. This alcohol is suitable to be used as a biofuel in cars and other vehicles. Most hybrid automobile engines that use ethanol can also use gasoline, and are also called “flex-fuel” engines. The ethanol is injected into the engine in the same way as a non-hybrid automobile engine. Though ethanol gives slightly less miles per gallon than gasoline, it doesn't create as much air pollution when it is burned.

The similarities between ethanol “flex-fuel” engines and standard engines make ethanol cars cheaper than most alternative or hybrid vehicles, because they are built in much the same way as a regular engine. Ethanol is actually cheaper in some cases than gasoline, and thus a hybrid that runs on ethanol can be less expensive to operate than a gasoline based vehicle.

Most standard automobiles can even run on a 10% mixture of ethanol in gasoline. Many gas stations around the world offer ethanol as an alternative to gasoline, and in some countries cars are required to run on ethanol.

You can find out more information about Hybrid Cars at www.prohybrid.com along with video news, reviews, and tools such as price quotes and an automotive loan calculator.