If You Put Your Car into Reverse while Driving, What Would Happen 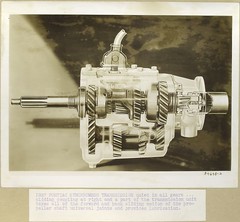 Believe it or not that question has been anticipated by the engineers who design cars. These people have been young once too. They know the strange quirks of imagination that sometimes disturbs and continuously haunts young people. And that particular question must have been in their minds when the templates of modern cars were built.The mechanism of reversing the car depends on three distinct parts of the car. Essentially, the reverse gear is used to rotate the wheels of the car in a direction that will bring the car backwards. Therefore, the reverse gear will have to find some way to lock on to the shafts responsible for the motion of the tire wheels. This mechanism is provided as teeth on the main shaft of the engine and another set of teeth on the axle of the wheel which is propelling the car. We are referring here to two wheel drive cars. The manner of inducing reverse for four wheeled drives is practically the same.So we have the reverse gear with its set of teeth which needs to lock in to the teeth on the main shaft and axle of the car. And these three together make it possible to propel the car in the reverse direction.One might expect, of course, that if a car were running at high speed, pulling on the reverse gear would have the effect of violently stopping the car and throwing up the driver against the front window of the car, that is if the transmission didn’t get smashed up in the process.But on the basis of the manner in which reverse motion is produced, the main shaft of the car as well as the principal axle have to be motionless for reverse motion to be possible. This is because in order for the teeth in the reverse gear to lock into the teeth of the shaft and the teeth of the axle, they have to be fixed in a designated location. It is not possible for this interlocking to take place while the car is in motion because the two sets of teeth on the main shaft and axle will be rotating, and rotating in opposite directions. If the driver were to try to reverse the car at that point, the most disastrous results he could hope to get would be to blunt all the teeth on the gear, the shaft and the axle as the spinning teeth grind against the reverse shift. There would be a rasping noise produced by such grinding motions. Apart from that, the motion of the car would remain constant if slightly encumbered. Naturally if the driver were to retain the reverse gear in that position he will probably damage the all the teeth mechanisms involved in driving in reverse. And since that may involve having to replace expensive parts, it might be considered tragic in a sense.We cannot know exactly why the design for reverse is meant to be effective only if the car is in full stop. Was it a necessity implied in the way modern cars are constructed or a safety mechanism deliberately included by the originators of modern day cars?Whatever the case, we need to be grateful to chance or purpose for this. Imagine how many young people might have been added to the fatality lists resulting from car accidents if car transmissions exploded by putting on reverse mode while the car was at full throttle. Its best to drive with precaution and shift properly to ensure the car will not be damaged from putting your car into reverse while driving.

If Part Shop Page
From Amazon
This entry was posted in Automatic Transmission and tagged Driving, happen, into, reverse, Would. Bookmark the permalink.