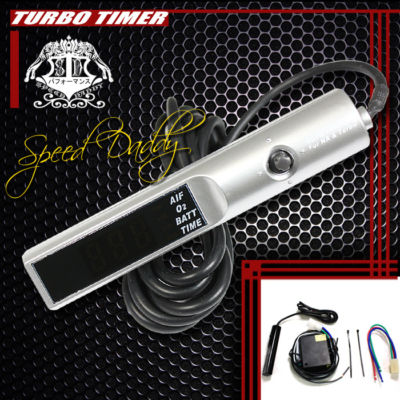 Programmable led color digital display turbo timer allows the vehicle to idle the engine, for the timed period, with the ignition key removed
Universal for all manual & automatic transmission vehicles both turbo-charged or non turbo-charged. Auto Mode – Precise calculation of cool down period to ensure proper cool down of turbo-charged engine. Digital display – Allowing you to see during day & night time.

A turbo timer is an electronic device designed to keep an automotive engine running for a specified period of time in order to automatically execute the cool-down period required to prevent premature turbo wear and failure. A turbo timer can be programmed to leave the engine running for a specified period of time even after the driver has exited and locked the vehicle. After a period of driving when a turbocharger has been working hard, it is important to let the engine run at idle speed for a period of time, allowing the compressor assembly to cool from the lower gas temperatures in both the exhaust and intake tracts. At the same time the lubricating oil from the engine is able to circulate properly so the turbine won’t burn the lubricating oil that would otherwise be trapped within the charger with the turbine rotating at high speed.